Globally the trend towards using interim executives and professional staff is experiencing strong growth. Candidates are increasingly viewing interim opportunities as a good option for building their career profile, with many wanting the benefits that come from flexible work experience. For organisations there is value in using an interim executive as additional resources during periods of change, or as a short-term solution for a vacant position whilst a long-term solution is identified.

We had the pleasure to speak with several interim executives in the healthcare, not-for-profit and academic sectors, many of whom have been working in an interim capacity for several years; discussing their thoughts on the pros and cons of interim roles and to provide some advice for those that may be considering an interim placement.

We spent 5 minutes with interim executives:

What were the characteristics that primarily attracted you to an interim role?

I have been on contract work since 2014. I really enjoy the flexibility of this type of work. It is almost like doing projects because there is always a reason for it. Occasionally it is just to maintain Governments and processes. Other times I will be requested to do some extra work, such as review services, quality improvements or work towards KPI’s. I also love the variety and challenges that come within an interim role.

I have worked as a CEO since 1999 in various jobs. A couple of years ago I decided to pack up my own company and do a mixture of projects and interim work for almost 2 years. I really enjoyed doing it and I planned to continue to work in this type of role for a few more years. It gave me variation and time to travel because my children were a bit older. I could pick and choose assignments and have time to do other things as well.

I had just finished a long-term permanent position and I was looking to try something different. It was an opportunity for me to explore a role and see what it was like and give me some flexibility in terms of future opportunities. This was the first Interim role I decided to take on.

How long do your interim projects usually last?

Generally, between 3-6 months and I usually know how long they are going to last however there is always a bit of an overlap. When I was working for Neurological Research Australia, the project was originally set to be a few months, and I ended up being there just under 8-9 months.

Was it difficult for you to extend your time giving that you had only planned to be there for 3 months?

Having the extra time allowed me to do a few more things in terms of reforms and getting to know the business better and from a selfish point of view, it allowed me to develop my own skills in areas that I hadn’t previously been exposed to.

I am in the second half of my career looking to do things differently and explore a bit more, so the extension was very suitable for myself. If I had children or a partner to think about my decision may have been more difficult.

Have you encountered any challenges within an interim executive position that you may not have experienced having been in a permanent role?

There are lots of challenges with an interim role. The main issue for me was not having the time to help the organisation to embed the changes that I implemented. Six months is a very short time in terms of change management. I was able to make some great improvements whilst I was in the position in the Northern Territory, however, I wasn’t able to see them through to becoming business as usual and that was unfortunate.

The major issue is making sure that you don’t rely on the fact that you aren’t going to be there in a few months’ time. You need to go in with the mindset that you are going to be in that job permanently, otherwise, there is the risk of thinking “oh well, I won’t be here in a few months, so I won’t worry about that, or I won’t do this…”. There is a big difference to just being there and keeping the seat warm to adding value to the organisation.

In an interim role, you are there for a shorter time, as far as planning and strategy go, you need to make plans to be just over the bonnet. You need to decide on time-driven achievements because there are some things that you simply don’t have time to complete. You can’t always change the direction which you could if you were working permanently in a position. The person who is in the job isn’t there, so you need to suss it out by managing up and speaking to people. From a workforce point of view, the person could decide to come back and not do it.

Did you find it challenging to adapt to your new role in the time-frame you were given at Vision Eye Institute?

The short time-frame is the main challenge when taking on an Interim role as you must come into an organisation and get to know the place, the people and what they do in a very short space of time. At the end of 3 months is probably when you are just starting to completely understand the place. The positive part about the short time-frame is being thrown into the deep end and learning to deal with daily challenges. If you like to be challenged, it can serve a sense of adrenaline.

Do you believe that an interim role can serve as an opportunity for personal growth?

I personally don’t see Interim roles as a permanent solution, but there is an opportunity for personal growth. You need to change your skillset. It is time-dependent, so you need to be able to adapt and hit the ground running. You need to think about what you are doing in a different way to how you would in a permanent position and have a different perspective.

Working an interim role is a magnificent adventure: it is like a working holiday. You get to live in a new place and you can be a tourist on weekends and that’s what I did. It was fantastic.

Yes definitely. Interim roles are a whole new discipline. They require clear outcomes and objectives and it’s necessary to avoid creating a sense of dependency or longer-term expectations. In addition, I’d argue that they rely on the faster establishment of positive working relationships so that your client gets real added value. Successful interims deliver objectives, create learning and leave colleagues with additional skills.

Absolutely! That was one of the main attractions for me. Learning and being exposed to different things and constantly challenging yourself. At the end of the day, in an Interim role if it doesn’t work out you can move on, and if it does, then you’ve gained invaluable experience.

Absolutely. I have worked all over the country. It is good because you get to the stage where you know what works and what doesn’t and quite often get a moment of Deja-vu. Most of the time you can add value to a company because they may have an idea which you know doesn’t work based on past experiences, and you can, therefore, offer a better alternative. There are constantly a set of circumstances you need to address and there is always a reason why you have been hired. 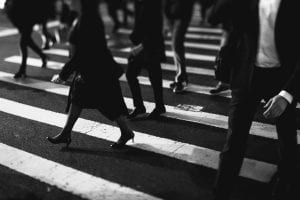 Is it challenging to hand-over the role?

I hold the view that I have stewardship of positions within organisations rather than ownership of them and it is my responsibility to hand on that aspect of the organisation that I was responsible for, to the next person. I don’t have any problems handing over. We are all on the one team – improving the health and wellbeing of Australians.

One of the risks with interim is if you are a committed individual, organisations can get under your skin. Ability Options got under mine and I decided I wanted to finish what I had started.  I came as an Interim CEO to cover the role while they recruited a substantive CEO, with no intentions of applying for the full-time position at all. I really love the organisation, the factor and what it is trying to achieve. In the end, I got drawn in and decided to apply for the permanent position.

If you were to give a person some advice about starting an interim role, what would it be?

When you accept an Interim position, you leave your home and your life behind. You need to be wise about the assignment length that you are taking on. Everyone probably has different preferences, I think 1 month is quite disruptive because it doesn’t give you much time to do anything, other than maintaining the status quo. I think the longer-term ones are good because you have time to formulate a plan and get things going. Social isolation and how you handle that can play a big role in your success, especially in different environments, depending on whether you choose to work in a city or rural areas.

The team that you will be working with will be grateful that you are able to take the reins for a short period. They will be happy to support you and help you to succeed. Take the time to get comfortable with your interim position and enjoy yourself. Your positive energy will be contagious, and you will reap many rewards from the experience.

The key thing is to be clear on what the nature of the job is. Is it to fill a gap and keep things in the direction that they are already going? Is it a turn-around? What needs to be done? Then you work to that. The second thing is to make sure that you have a good exit strategy so that the incoming CEO (or other role) can seamlessly step in and do the things that they need to be doing for the longer term. This is very beneficial for the organisation. It is important not to create a sense of dependency or reliance.

It is all about your contacts and network. You do need to treat it like it a professional practice. It is important to have your LinkedIn up-to-date and build your connections. You need to be prepared to take roles that aren’t always what you want. I spent 3 months babysitting a STRATA management business in Darwin as a friend of mine needed someone responsible to look after their business over the Christmas period. You need to be open-minded.

We were so fortunate to have the opportunity to speak with our selected candidates and gain some invaluable insight into the interim workstyle. As with any position, there are going to be positive and negative experiences.