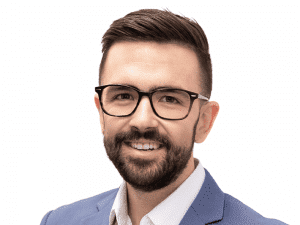 Michael De Santis is a Principal Consultant here at Ccentric Group. He is responsible for end to end executive search processes as well as the engagement and sourcing of existing and new clients and candidates. Initially joining Ccentric in 2015 as a research associate whilst completing his PhD, Michael quickly grew into a consultant position. He is now a trusted partner to clients and candidates alike.

Examples of previous searches Michael has conducted include:

He brings a personable and professional approach combined with an intricate understanding of the greater health and academic sectors, something that has resulted in an ever-growing number of highly successful search placements.

Michael is driven by a strong passion to have a positive impact on the health of the community, a key factor that has led him to also complete his doctorate in the health and medical science field in 2018, publishing and presenting his work on multiple occasions.

Outside of work Michael’s interests lie in soccer, football, golf and surf lifesaving; and most recently, playing with his puppy Jethro.